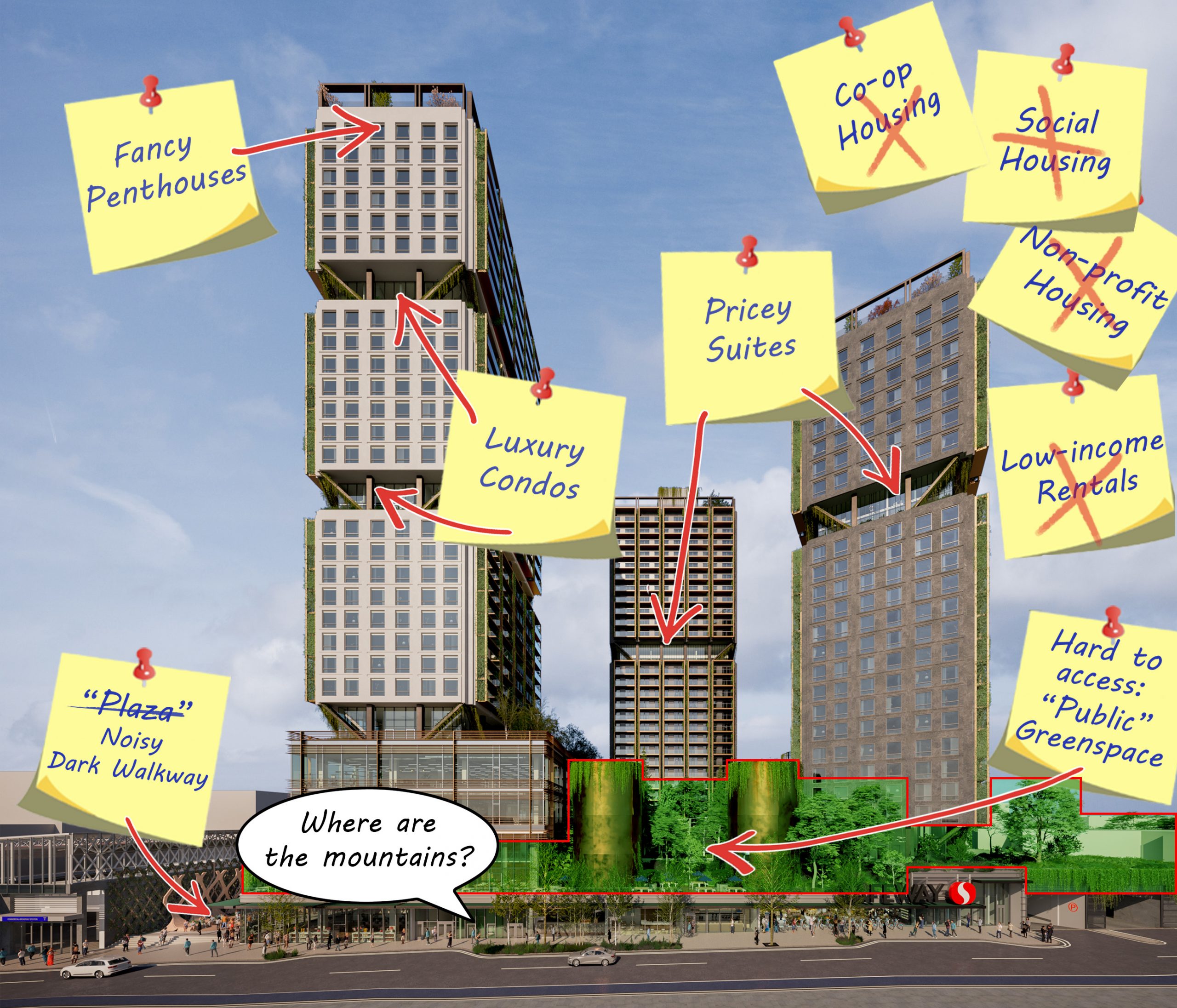 Minor modifications to a massive tower proposal at Broadway and Commercial do nothing to address major community concerns around the project, says the NO MEGATOWERS AT SAFEWAY coalition.

The plan is still much too high and a threat to affordability.  It continues to jeopardize the future of the vibrant Commercial Drive neighbourhood, the group says.

The modified proposal, by Crombie Real Estate Investment Trust and luxury developer Westbank Corp., contains 653 suites, of which 93 are designated “below market” – 14%. This is far less than what’s needed in Vancouver’s hyper expensive rental market.

There is no low-income or social housing proposed.

All green space will be locked off to the public, accessible only to building residents – a gated complex.

The NO MEGATOWERS AT SAFEWAY coalition is very supportive of high density at the Broadway transit hub, but it opposes this proposed megaproject as it completely violates the findings of the Citizens’ Assembly and the Grandview Woodland Community Plan.

Astonishingly, the modified proposal actually spikes the height of all three towers compared to the previous proposal.  The proposed towers are now equivalent to 41, 37 and 33 residential storeys from ground to the very top. These elevations soar far above the Community plan, which calls heights ranging from 12 to no more than 24 storeys above retail. The cause of the spike is found in the fine print: while technically the developers have removed a level from each tower, they have increased individual storey heights, increased the height of a main underlying commercial & retail section, and stacked screens and taller elevator enclosures onto the top of all roofs.

The modified plan doesn’t address the need for a generous, centrally located and sunny public plaza called for in the official community plan.  Instead it labels as a “plaza” a shadowed walkway between the development and the noisy SkyTrain station.  As well, all daycare spaces contained in the former proposal are gone.

These skyscrapers will boost nearby property values, taxes and rents on local businesses, which are the backbone of eclectic Commercial Drive.  Nearby affordable housing stock also will be at serious risk.

The NO MEGATOWERS AT SAFEWAY group encourages a design at the Broadway station that  is relevant to our times—socially, architecturally, ecologically – one with the latest in green technology, building materials, construction, energy, and liveability.

The coalition calls on the proponents to go back to the drawing board and produce an entirely different plan, one in scale with the needs of the community.

The City is extending keeping its comments box open – there has been so much feedback:: https://shapeyourcity.ca/1780-e-broadway